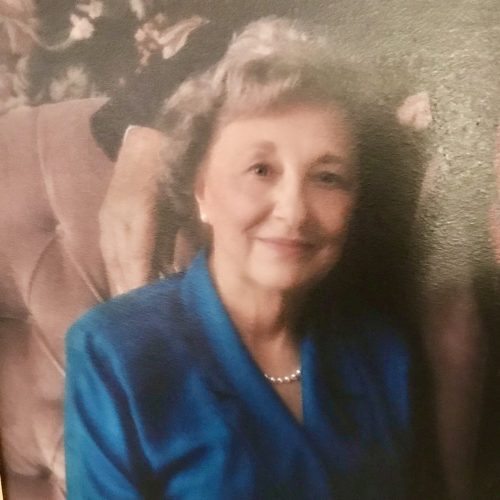 TUPELO, FORMERLY OF SIKESTON, MO—Dorothy Clinton died peacefully in Tupelo, MS, July 28, 2022. A woman of strong Christian faith, she was a devoted wife, mother, grandmother, and friend.
Dorothy Clinton was born to Dean and Myrtle Marshall on October 11, 1926 in Sikeston, MO. A life-long resident of Sikeston, she attended Southwest Baptist University in Bolivar, MO. as a pianist studying music. During World War II, she returned to Sikeston where she was employed as a telephone operator. Dorothy met the love of her life and best friend, Ray Clinton when he came to Sikeston after the war to found the R. Clinton Construction Company. They married on December 13, 1947, and were together until his passing on August 20, 2011.
With Dorothy by his side supporting his vision every step of the way, Ray developed many far-sighted and successful business projects. They were long-standing, active members of the Sikeston First Baptist Church and shared a deep dedication to their community. Together they raised four children.
Dorothy was a charter member of the Pink Ladies at the Missouri Delta Medical Center. She was a Girl Scout leader, active in the PTA, and a charter member of the JU chapter of the P.E.O. Sisterhood. She loved to play bridge, and she was wise.
Dorothy and Ray were travelers. From a pontoon and a speed boat at Kentucky Lake, to an ocean-going boat in the Florida Keys, they loved boating. Every year they traveled with a dear group of friends they called the Biloxi Group.
Private interment will be at a later date.
Senter Funeral Home has been entrusted with the arrangements.
Dorothy is survived by her daughter Carolyn Klein of Tupelo, MS: daughter Sheila Williams(Rick) of Clinton, MO; son Chuck Clinton(Liza) of Shreveport, LA; and son Steven Clinton of Naples, FL. She is also survived by seven grandchildren Ray Bell, Joc Bell, Kelly Williams, Chris Clinton, Tiffany Clinton, Marshall Clinton, and Matthew Clinton; four great-grandchildren Stella Greenhill, Mamie Alston Bell, Joseph Bell, and Jack Bell, and many nieces and nephews. In addition to her parents, three brothers and one grandchild preceded her death. She spent her final years in the care of her family in Tupelo.
In a letter Dorothy left for her children, she wrote wisdom to live by: “Always look for the good in others. With every blessing you receive, pay it forward. You don’t need expensive things; remember you can make the best spaghetti in the world. Love your children. Enjoy life. Don’t cry over things that were, or things that aren’t. Above all seek God. He will come to you if you look.”
In lieu of flowers, the family request memorial contributions to Missouri Delta Medical Center, www.missouridelta.com/foundation/in-honor-memory-of-someone/ in Sikeston, MO or the Sanctuary Hospice House www.sanctuaryhospicehouse.com in Tupelo, MS
Online condolences can be shared with the family at www.senterfuneraldirectors.com

Celebrate Dorothy's life with a short message, photo or video!

What a Beautiful picture of My Friend and.Your Mom! I walked with Miss Dorothy for years at the Mall. I always enjoyed visiting with her and having coffee with her and the girls afterwards . I will miss her. ILoved what she said in the Obituary. Your parents were Lovely Respected people and are together again 💕 We’re sorry for your loss.

What a Beautiful picture of My Friend and.Your Mom! I walked with Miss Dorothy for years at the Mall. I always enjoyed visiting with her and having coffee with her and the girls afterwards . I will miss her. ILoved what she said in the Obituary. Your parents were Lovely Respected people and are together again 💕 We’re sorry for your loss.

I have so many good memories of your Mom!! For years the "Campbell kids" would meet our parents in Key Largo. Your parents were always so nice to include us at their parties and dinner out nights. They always took a genuine interest in how and what we were doing. Her words of wisdom ring so true! What a classy lady! You all our in our thoughts and prayers. Jane, Harry & LaRue

Sorry to hear about your mother. You will be in my prayers.

My wife, Janice, and I offer our deepest condolences in your loss. We knew Mr. and Mrs. Clinton from First Baptist Church in Sikeston; what a sweet couple! We shall have a glorious reunion day, someday! Stan & Janice Bandermann